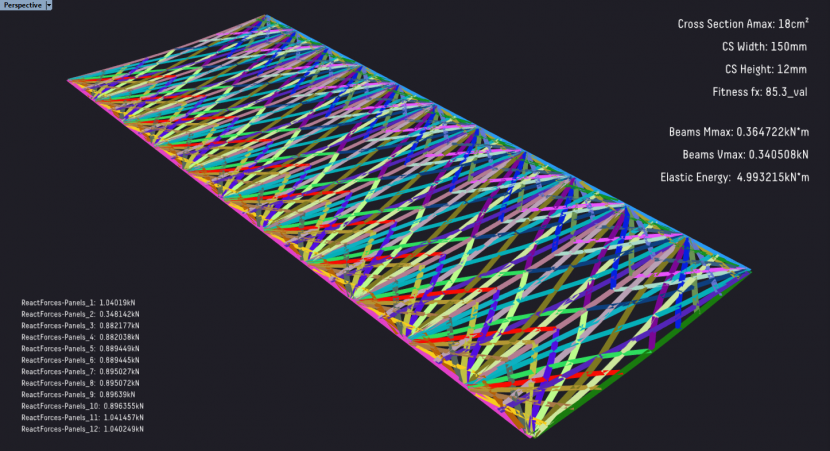 Below is the description of the main i-Mesh project within I have been involved. I would like to share with you a sneak-peek of the research and i-Mesh internal improvements that I have contributed as a Computational Designer and, simply, as an Architect who lives in the Digital Era and believe in the computational thinking approach to the Architecture and Design fields.

Thanks to the whole i-Mesh Team and to the incredible exchange of know-how that took place between S.I. Company, Politecnico di Milano and Werner Sobek Architecture & Engineering firm – thanks to the “visionary” Alberto Fiorenzi the “glue-man” of this experience. A personal thanks go to the architect and professor Salvatore Viscuso (PoliMi).

The design of the i-Mesh membranes intended to cover the promenades of the Dubai Expo 2020-21 (about 50000 sqm) represented a moment of integration of design and research knowledge in the textile field between i-Mesh “Architextile”, the Politecnico di Milano and the German International Architecture and Engineering WERNER SOBEK firm. The university research group investigated the mechanical characteristics of the textile samples produced by i-Mesh and, consecutively, has developed a calculation routine in the parametric/algorithmic field intended for finite element structural analysis (FEA) focused on the textile material.

The digitization of information and virtual design development has been entirely processed through the McNeel Rhinoceros & Grasshopper (VPL) platform – digital development and design environments already in use in the R&D and design department of i-Mesh. The research work was subsequently perfected and expanded by i-Mesh in terms of algorithmic optimization with further design aspects and in particular for the pre-sizing of geometric patterns which, from time to time, have undergone changes in the various development phases in collaboration with the design team of WERNER SOBEK.

The structural design of i-Mesh required some test and analysis campaigns to investigate the mechanical characteristics of the material, the latter supplied in 300 x 300 mm specimens. Through uniaxial and biaxial mechanical tests (at Textile Hub PoliMi) it was possible to characterize the i-Mesh material by defining its yield and rupture stresses and, consecutively, its elastic characteristics.

The data collected from the test campaign allowed the setting of input data useful for defining and writing the FEA algorithm through the Karamba3D plugin intended for these purposes. These data have been appropriately coded according to a relationship of direct proportionality between the required TEXs and the axial forces Nmax generated within the panels arranged on the pergola system.

The algorithm facilitated the critical reading of the stresses (Moment, Shear and Normal Stress – M, S and N) both in the areas of the mechanical junction with the hook supports and, as previously mentioned, within the individual groupings of rovings.

The basic algorithm performs an analysis of the structural behaviour of the original pattern taking into account a geometric pre-process phase that reduces the geometric design, precisely, into finite elements (beams). Below is the algorithmic that I have improved for i-Mesh purpose:

Main functions/operations of the algorithm:

A: geometric pre-process of the i-Mesh pattern;
B: definition of the loads on the overall structure
C: identification of the main structural directions (load-bearing bands)
D: Karamba3D components setting (FEA)
E: definition of calculation routines intended for the dimensional optimization of the bearing bands
F: main outputs of finite element calculus
G: data/information to be processed in a special preformatted spreadsheet
H: dynamic information to be shown on the display during the optimization phase

In this sense, for this last layer, given the computational complexity in terms of IT resources, as well as hardware, a further simplification of the geometries was opted for. This simplification consists in the identification of development axes representative of the main directions of the drafting of the fibreglass rovings. Among the implementations made to the original algorithm, there is the possibility of easily identifying the main structural directions appropriately defined in the design phase of the geometric pattern.

Another fundamental function was to facilitate the drafting of an algorithm block (letter E) intended for the optimization of the cross-sections coinciding with the structural bands using optimization algorithms.

During the setting phases of the geometric aspects of the membranes and, in general, of the entire “pergola” structure, the possibility of dynamically modifying both the dimensions of the individual panels and the number of panels involved in the specific section of the structure being analyzed. In this way, the algorithm adapted the loads weighing on the structure dynamically and allowing a quick evaluation of the SAG values obtained (lowering of the panels in the middle, otherwise called displacement).

As indicated, the implementation of the algorithm has focused attention on two of the fundamental aspects that affect block E, namely, the one assigned to some aspects of the dimensional optimization of the structural bands. In this sense, it is necessary to state that in the field of computational design in the last ten years the so-called Nature Inspired metaheuristic studies have notoriously multiplied. In this sense, we refer to the evolutionary processes responding to the Darwinian logic or to the behavioural aspects of social groups, fields of research widely used in the resolution of complex or so-called multi-objective problems. The main groups of families that characterize these research areas, as reported by the scholar BROWNLEE, are the Swarm Intelligence (SI) algorithms and the Evolutionary Computing (EC) algorithms. The use of visual programming platforms has positively contributed to the pursuit of the “generalist” practise of design exploring and to the more specific one of form-finding and form-shaping in which the optimization aspects are most used. In this sense, without counting again the geometric and cyclomatic complexity of the computation routine described in this paper, it was decided to adopt for block E a solver based on the first family of algorithms and more specifically on the PSO method that it demonstrated, as described by CICHOCKA, BROWNE and RODRIGUEZ1Cichocka, J.M., Browne, W.N., Rodriguez, E.: Optimization in the architectural practice an international survey. In: Janssen, P., Loh, P., Raonic A., Schnabel M. (eds.), Flows Glitches, Proceedings of 22nd International Conference Association Computer Architecture Design. Res. Asia 2017, Paper, p. 155. The Association for Computer-Aided Architectural Design Research in Asia (CAADRIA), Hong Kong (2017), to be able to considerably contain the calculation times, unlike evolutionary solvers2Wortmann, T., Costa, A., Nannicini, G., Schroepfer, T.: Advantages of surrogate models for architectural design optimization. Artif. Intell. Eng. Des. Anal. Manuf. 29, 471–481 (2015). doi:10.1017/S0890060415000451.

In terms of optimization, the fitness function (computational constraint) concerns a double option, the first takes into account the deviation of the simulated displacement with respect to the design one (value of the design SAG), while the second is commensurate with the mechanical resistance of a number “n” of rovings grouped in the single bands. Below is an image extrapolated from the dynamic optimization process:

The main output of the algorithm is functional to the implementation of a pre-formatted spreadsheet structured in such a way as to take into account the previously described safety factors, as well as the yield and failure values of the tested fabric samples

Below the layout of the spreadsheet relating to the constraint reactions on the supports (top) and the one relating to the stresses detected in the individual beams (bottom) are reported. 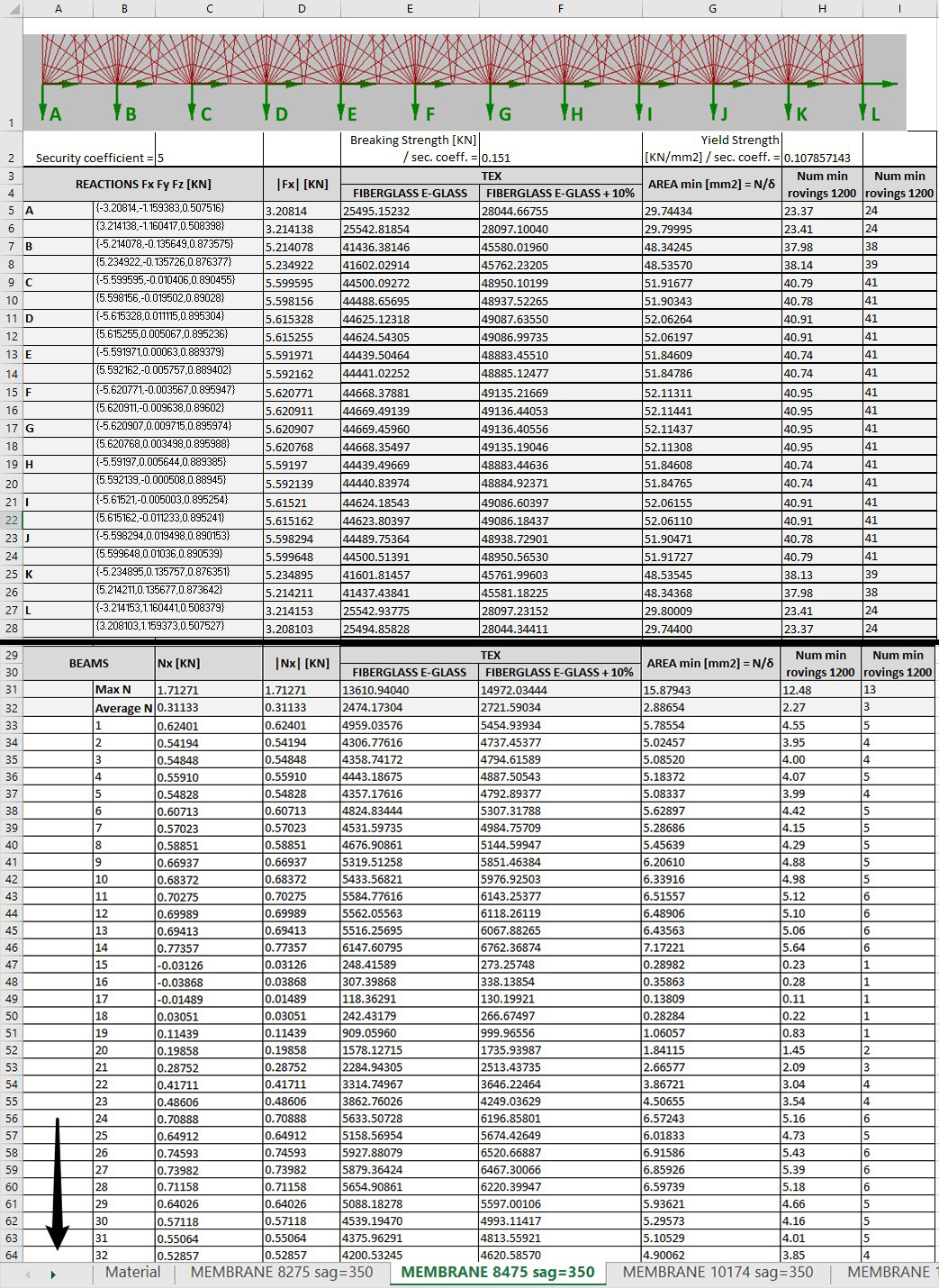 i-Mesh openness: determination of the opening percentage of the geometric pattern

One of the aspects that most characterize the i-Mesh pattern is undoubtedly the percentage of permeability of the geometric design. In the case of the membranes for the Dubai Expo where they exceed 20 meters in length, I developed an algorithm with elements of Machine Learning to determine the distribution of the full/empty ratio. The reason is related to the computational complexity and to the hardware limits for which, in addition to automatically breaking down the pattern into small clusters, the presence of ML calculation elements guarantees to avoid incorrect results from the calculation of the area.

I leave you, in this already too verbose poster of the video described above.

Thanks for your attention and good vision!